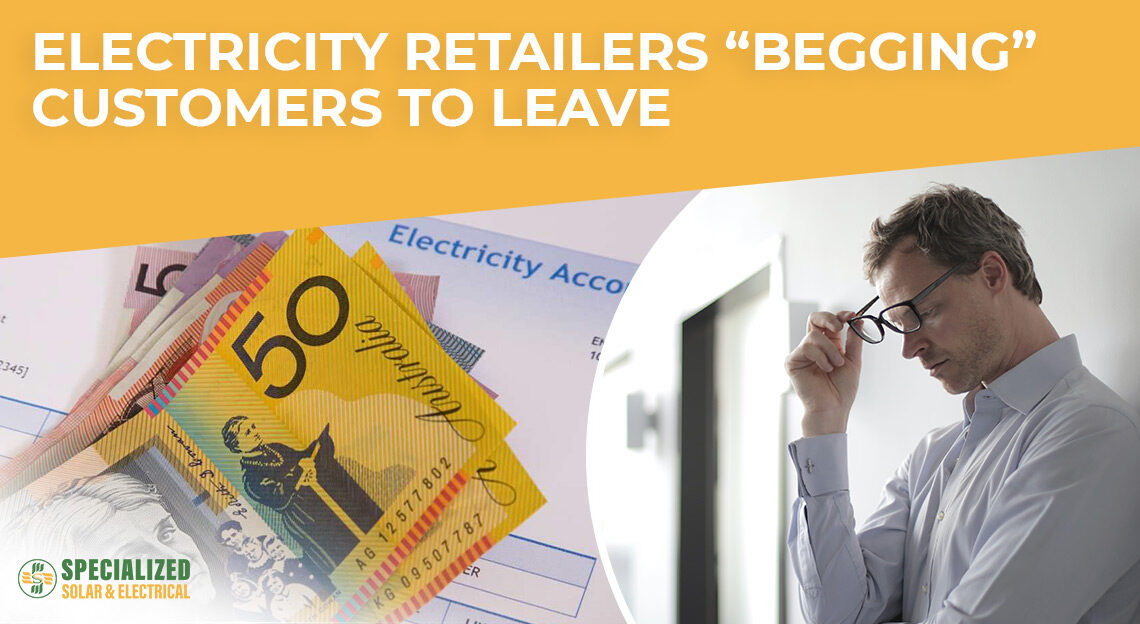 Smaller electricity retailers are telling their customers to go elsewhere or face a doubling of prices.

In the last month, tens of thousands of Australian households and businesses have received a letter from their electricity retailer literally “begging them” to go away.

The CEO of one retailer – Electricityinabox – wrote to customers saying “only the lazy or crazy would stay” with his company, with its rates set to go up 95 per cent on July 1.

CEO of electricity retailer, ReAmped, told their 70,000 customers to shift “before it’s too late” and switch to “a better deal” with another retailer. They are even offering $100 gift vouchers to customers who leave them.

Other retailers who’ve told their customers to go away include LPE, Discover, Elysian and FutureX. Green electricity retailer – Enova Energy – has just called in the administrators.

Electricity retailing is in chaos. Gas is also struggling.

What’s going on? And what should you do about it?

Why are smaller electricity retailers shutting up shop?

The Australian east coast is in the throes of an energy crisis.

Wholesale electricity prices have skyrocketed. Retailers who buy electricity on the wholesale market are highly exposed to price volatility. Because there’s a cap on what they can charge customers, their margins have shrunk to nothing – meaning it’s costing them to keep customers.

The big electricity retailers who also generator power – like AGL, EnergyAustralia and Origin – are doing just fine. That’s because they’re reaping the profits from crazy high wholesale prices. So, the price cap on what they can charge households doesn’t matter much to them.

The result is any electricity retailer that doesn’t own coal and gas-fired generators could go bust. Maybe a handful with big stakes in renewable energy generation – like solar farms, wind or hydro – can tough it out. But the writing’s on the wall for the small retailers who source their electricity mostly on the wholesale market.

It’s the end of the small electricity middleman.

That means less competition. It’s the big three electricity retailers – AGL, EnergyAustralia and Origin – who’ll survive because they make big bucks from the generation side of their business. And that means they’ll well-placed to dictate the prices Aussie households and businesses pay for electricity.

What this means for you

If your electricity or gas retailer pulls the plug, you are protected. Your lights won’t go out. You won’t be left without heating.

That’s because of a safety net called ‘retailer of last resort’ which applies for gas and electricity.

Gas retailer Weston Energy was closed by the regulator at the end of May triggering the ‘retailer of last resort’ mechanism.

Customers were automatically transferred from the failed gas retailer to other retailers in Victoria to provide a continued supply of essential gas services.

But there’s a catch.

If you’re flicked over to another retailer, they put you on their standard market rate.

Generally, that won’t be their best rate.

The interesting thing is that there are only three retailers of last resort.

What you can do about it

A good-size solar panel system with battery storage shields you from volatility on the Australian and global energy markets.

There’s not one market analyst right now saying electricity prices are going to stabilise. In fact, the opposite is the case. From July 1, electricity prices are set to rise by up to 20 per cent across Australian states. And experts say that’s just the beginning, warning that we should brace ourselves for more massive hikes.

It’s not a great outlook.

But you can take action to minimise the impact on your home or business.

Talk to us about solar and battery storage. Ask us about government rebates. Find out what solar system is best for home or business.

Solar power systems are better than ever better. Prices are affordable. Payback can be as quick as two or three years. And, if required, we can arrange low-cost solar financing.

Get the full picture on how much you could save with solar.

Get in touch with the Specialized Team.