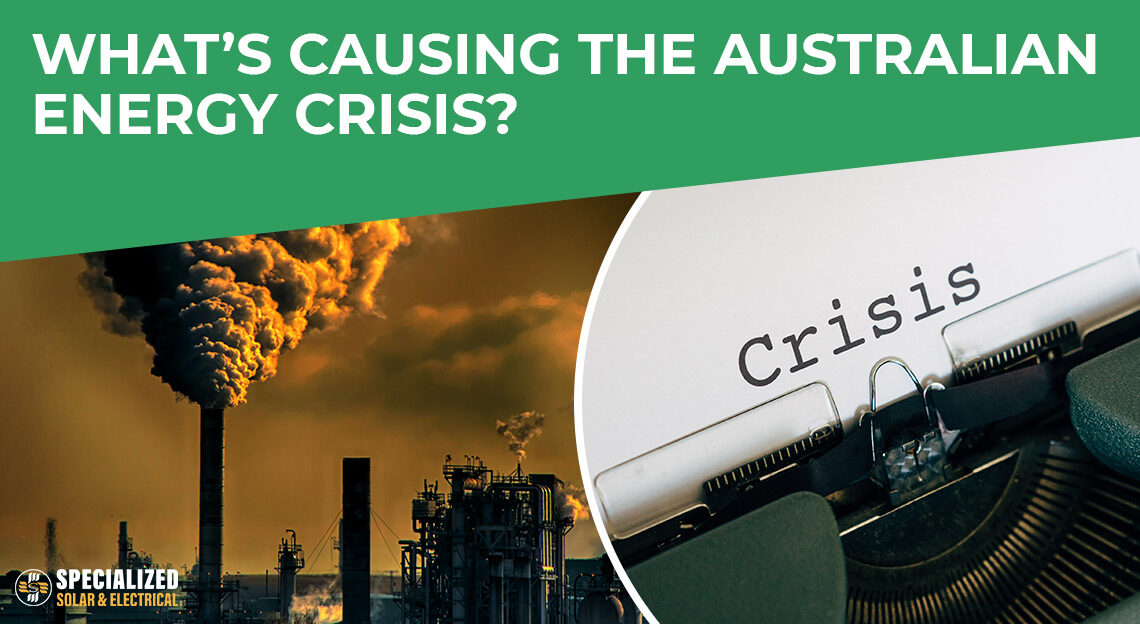 Australia is in the throes of an energy crisis.

For a country rich in energy resources, it seems crazy. But last week the entire east coast was facing the threat of widespread blackouts and load shedding. Wholesale energy prices were soaring. Coal and gas generators were being accused of gamesmanship, holding out for higher prices. Ministers were asking people to switch off the lights to save energy.

The electricity market was spinning out of control. Energy minister Chris Bowen warned that the country was facing “a perfect storm” of limited gas supply and electricity price hikes.

The situation was reaching crisis point.

Then, on June 15, the Australian Energy Market Operator (AEMO) stepped in and took over control of the National Energy Market; something that’s never happened before in the nation’s history.

Now, AEMO sets the prices and orders generators supply power – telling them when and how much.

So far, the lights are still on.

But what on earth is going on?

What is the National Energy Market?

To understand what’s causing the crisis, it’s important to know a bit about the National Electricity Market (NEM).

That’s because the NEM is at the epicenter of the crisis.

The NEM is a wholesale market for electricity. It is where generators are paid for the electricity they produce.

It functions as a spot market with prices set by auction every 5 minutes. Prices are typically around $80/MWh (megawatt hour) but can go as high as $15,100/MWh (the price cap in normal circumstances).

The NEM is heavily dependent on power from fossil fuels. Around 70% of electricity on the NEM is from coal and gas (with coal the largest component at 64%). Only 30% of the NEM is from renewable energy sources (wind, solar, hydro etc).

As such, the NEM is highly exposed to external factors that affect the price of coal and gas – and that’s exactly what’s been happening.

What caused the energy crisis?

There are five main factors that have caused the energy crisis on the Australian east coast.

During lockdowns, the demand for energy reduced as business and industry was put on pause. As a result, the stock of raw materials – such as coal – required by the generators was running down. When life started to return to normal late last year, suppliers were caught short and struggled to catch up with demand. As a result, supply inputs were scarce causing generators to put up their prices.

It might be 13,000 kilometres away, but the Russia-Ukraine war has had a massive impact on energy prices in Australia.

Up until the war, Russia was Europe’s largest provider of oil and gas. But because of Russia’s invasion of the Ukraine, immediate sanctions were placed on Russian oil and gas.

For Australian coal and gas producers, it was a gravy train. They could get much better prices for exporting their excess capacity than on the domestic market. And because there were no export caps for energy producers on the east coast, there was nothing to stop them.

As a result, generators were faced with skyrocketing prices for raw material inputs. Their response was to immediately jack up prices for the power they generated to maintain profitability.

So, that was bad. But it got worse…

The biggest source of electricity in Australia is still coal. But coal plants are ageing and becoming increasingly unreliable. Many are heading for closure. Less maintenance is being done, so there are more breakdowns.

In the weeks leading up to the suspension of the NEM, 30% of coal plants were offline. Some of these closures were planned, but many were unplanned.

This reduction in coal-fired generation capacity took the market by surprise. Suddenly there was a massive supply shortage which served to push up prices to record levels.

So, supply was down. Prices were heading into the stratosphere. What about demand?

The coldest start to June in seven decades came at exactly the wrong moment for the failing national electricity market. It’s this time of year when energy use is highest across Australia. And with the extreme cold snap, demand for electricity and gas was much higher than expected. Generators were caught short and put under even more strain.

The system was at breaking point.

5. Lack of orderly transition to renewables

So where was all the renewable energy to shoulder the supply shortfall?

Basically, it’s not there yet. There is not enough on-demand renewable energy generation in the system to meet supply shortfalls from coal-fired generation.

What is needed is renewable energy that can be brought on instantly to meet supply challenges. We’re talking battery storage, pumped hydro, green hydrogen for example.

The problem is there has been a lack of investment to shift the electricity market in an orderly fashion to renewables.

That’s resulted in a lack of commitment from coal generators to maintain their infrastructure whilst the on-demand renewable energy capacity is being built up.

What happened when the regulator stepped in?

This is when things got interesting.

The National Electricity Market regulator, AEMO, stepped in and set a price cap at $300/MWh.

The generators responded by withdrawing supply as it was not profitable for them to supply at that price.

AEMO then asked generators to supply to the grid to avoid catastrophic blackouts – which meant generators got a better price.

Suddenly the generators found more supply and were accused of “gaming the market.”

The situation was deteriorating fast. Blackouts were still on the cards.

So AEMO took the unprecedented action of suspending the National Electricity Market on June 15. That meant generators were ordered to supply power to the system at a set price regardless of the impact on their profits. The risk of blackouts was averted. Generators were brought to heel and paid a flat rate of $300/MWh with compensation for any losses.

One week after the NEM suspension, AEMO has announced it will slowly remove its control over the NEM.

However, even after AEMO lets the NEM get back to “business as usual”, it has warned that the east coast could face challenges maintaining supply and demand.

Industry experts say that the extreme prices will ultimately impact on energy consumers.

Households already being hit by up to a 20% rise in bills from July 1 due to the high cost of coal and gas.

Fixing the system won’t be easy.

One thing’s for sure, the federal government has a big job on its hands.