Thanks to the persistence and expertise of Anthony Igmen and his team at Specialized Solar, we were able to surmount the problem of Powercor’s export limitations at no additional cost to the project.
Neil Barrett OAM, co-founder of the Paddock 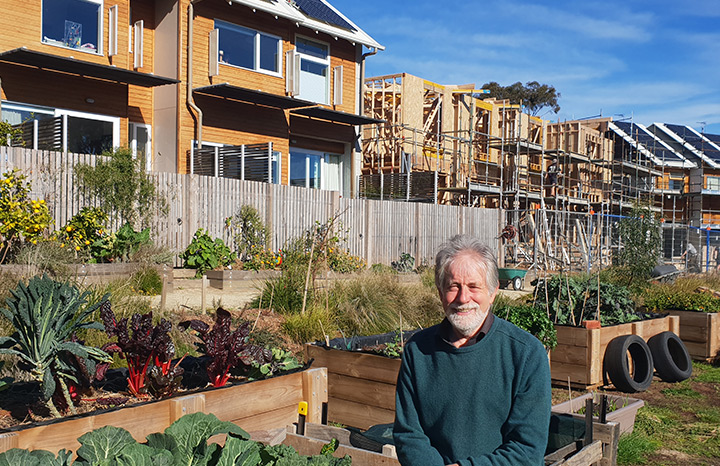 The Paddock, an eco village development in Castlemaine that is setting new standards for sustainable living, issued a tender for the supply and installation of solar power systems on 16 homes.

These homes comprise the second and third stages of this path-breaking development which – when completed – will have 27 houses in total and a community centre.

The new solar systems will be installed in phases as each group of four homes is completed. Each property, regardless of size, will have 4.2kW of solar installed.

One of the requirements of the Living Building Challenge – a global standard which The Paddock has signed up to – is that 5 per cent more clean solar energy is produced annually than is used by residents (from both grid and solar sources).

In the first eighteen months, the figure for the surplus has been close to 50%. This impressive result was a combination of:

Specialized Solar won the tender based on their combination of quality, price and service.

The first challenge facing Specialized Solar was that the network distributor, Powercor, advised that there was no capacity remaining in the local transformer to accept exports to the grid from the proposed new solar systems. This was a surprise for the client as the first group of eight homes had been approved for full solar exports only a year ago.

The client was informed by Powercor that if they wanted to export the excess solar power from the proposed new solar systems they would need to pay up to $50,000 to upgrade the transformer in the nearby street.

The client asked Specialized Solar to see if there was a way to overcome this issue and to deal directly with Powercor on their behalf.

The commercial consultants at Specialized Solar took the challenge on board. They completed the project assessment required by Powercor, liaised with Powercor’s engineers and submitted the necessary paperwork.

Powercor responded to say that as high quality inverters (Fronius) were being installed, Specialized Solar could change the settings on the inverters and, in that way, full exports from all the new systems would be allowed. Powercor also stipulated that the set-up of the existing solar PV systems had to be changed in the same way.

When completed, the Paddock will actually cut emissions from energy use in the homes by around 50 tonnes. According to the Paddock’s manager, Neil Barrett, a `back of the envelope` calculation indicates that the average residential development of the same size actually increases emisssions by up to 200 tonnes.

“Thanks to the persistence and expertise of Anthony Igmen and his team at Specialized Solar, we were able to surmount the problem of Powercor’s export limitations at no additional cost to the project,” said Neil Barrett.

“Getting this matter resolved was vital for the Paddock – not just for financial benefit of the solar credits from the feed-in tariff, but also because creating a carbon positive development is fundamental to the Paddock’s design ethos and something that simply couldn’t be compromised.”