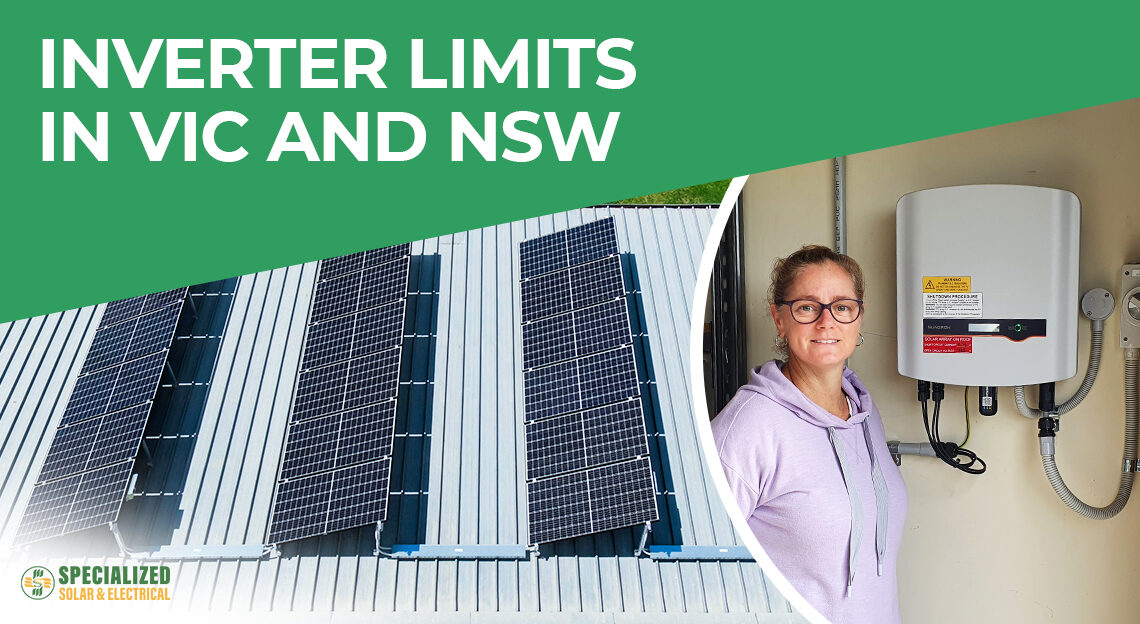 When you’re looking into getting solar panels on your home or business, you may hear the term, ‘distributor inverter limits’. You may even be told that you can’t have the size system you want because of these limits.

For anyone new to solar, it’s fair enough to query these limits. Why put a limit on the amount of clean renewable energy generation you can install on your home? Why is this happening? Surely, it’s better for the environment to put on the biggest solar system possible.

What are distributor inverter limits?

Before answering this question, let’s explain what a distributor is.

A distributor is the company who owns and manages the poles and wires that provide electricity to your property. The correct term for these distributors is ‘Distribution Network Service Providers’. No matter where you live in Australia, there will only be one DNSP for your location as they are, in fact, localized monopolies.

DNSPs impose limits on the amount of surplus solar electricity people you can export to the grid. These limits vary by distributor, some being more generous than others. In addition, more stringent export limits may be set for your property depending on the capacity of the grid infrastructure near you.

It’s important to know that before you get solar panels or a battery installed, your DNSP must grant approval for connection of your proposed system to the grid. This pre-approval process is generally handled by your Solar Retailer on your behalf.

In most cases, the network distributor will approve the size system you’ve requested, provided it’s within their pre-set limits. These limits are based on the type of power supply to your property, i.e., single-phase or three-phase.

Why do export limits exist?

The rules governing the operation of the national electricity grid were put in place around 25 years ago. Back then, electricity flowed only one way – from large, centralized generators (predominantly coal-fired power stations) to our homes and businesses. The concept of a two-way flow of electricity was unheard of!

But of course, things are different now.

Two-way flow of electricity is now the norm. Today, over 3 million Australian households have solar panels, making us the world’s #1 country for rooftop solar installations.

That’s fabulous, of course, but the ageing infrastructure of our national electricity grid is struggling to catch up. As a result, we’re getting more “traffic jams” on the grid, particularly on sunny days when millions of rooftop solar systems are pumping back power into the network. This is causing the grid to get overloaded which, in turn, causes problems with the quality of power to our homes and even power outages.

To circumvent this happening, network distributors impose limits on both the size solar system people can get installed, as well as the amount of solar electricity that can be exported back to the grid.

Export limits are a crude way of handling grid traffic jams, but they are the only tool that DNSPs have right now. The good news is that regulatory changes are happening that should help address this problem.

Inverter limits in Victoria and NSW by distributor

This is generally based on the capacity of the solar inverter, not the solar panels. Most distributors allow you to oversize your solar system by installing up to 33 per cent more solar panels than the rated capacity of the inverter. For example, if your inverter is 5kW, you can install up to 6.6kW of solar panels and still be within the rules. This is worth doing as you’ll get more power for only a comparatively small increase in cost thanks to the extra government rebates you get on the panels.

This table summarises the default position of most network distributors in Victoria and NSW in terms of the size solar system you can install:

Each distributor has their own particular set of rules when it comes to the size solar system they’ll let you install. Here are three scenarios you may come across:

3. Inverter limits for distributors in Victoria and NSW

This table provides a summary of the inverter limits imposed by network distributors in Victoria and NSW on residential single-phase and 3-phase properties. Note: DNSPs can change their rules on inverter limits and export limits at any time so this table is intended as a guide only.

What you can do if your distributor imposes an export limit

If you do get export limited, it doesn’t necessarily mean forever. DNSPs are starting to upgrade their infrastructure. Some DNSPs, such as Powercor, are contacting households who were export limited telling them that their export limit has been lifted.

Some people who get export limited responded by getting a battery. That way none of your solar electricity goes to waste. Instead, it goes into the battery for use by your household in the evenings, through the night and on days when the sun’s not shining.

An export limit means you don’t get paid as much – or anything at all – for your solar exports. But with the average feed-in-tariff in Australia now only 7 cents per kilowatt hour, it’s not worth worrying about. Getting approved for the feed-in credit should be viewed as a bonus, not the main game.

These days the best way to save money with solar is to use as much of the electricity generated by your system at the point in time when it is being produced (this is called self-consumption). Most homes going solar should be aiming for 75% self-consumption. This can be achieved using the smart Wi-Fi monitoring that comes with modern inverters, as well as timers and Wi-Fi-enabled electrical household appliances (such as reverse cycle air conditioners) which can be controlled remotely via an app.

What the future holds for inverter limits

We talk to hundreds of households and businesses every week about solar. What we hear is that people want change. They want more clean solar energy going back into the grid to displace dirty electricity from coal-fired power stations. They also want a fair deal for their solar exports and more government funding to improve infrastructure.

The government is starting to wake up to this desire for change, and this is beginning to flow through to action at DNSP level. For example, Powercor initiated a 5-year infrastructure improvement plan in 2021 which is rolling out across the entire Powercor region. This is resulting in export limits being slowly lifted for affected households and businesses.

As recent rule changes set out by the Australian Energy Market Commission start to come into effect, expect to see a gradual lifting of export limits across the whole of the National Electricity Network in coming years. This spells good news for solar households and good news for the transition of our national electricity network to 100% renewables.

Get in touch for a quote

If you would like to know what size solar system your DNSP will approve you for, get in touch. We’re happy to help and provide an obligation-free quote as well.

We install across Victoria and NSW and understand the rules and regulations of every DNSP in these states. We know how to work within the rules, and where we can push them just a bit to get the results needed by our customers.

With thousands of solar panels and battery storage systems installed on homes and businesses in Victoria and NSW, we have the experience that counts. Leading brands, competitive prices and outstanding customer service are just the start when you get Specialized Solar & Electrical on the job.