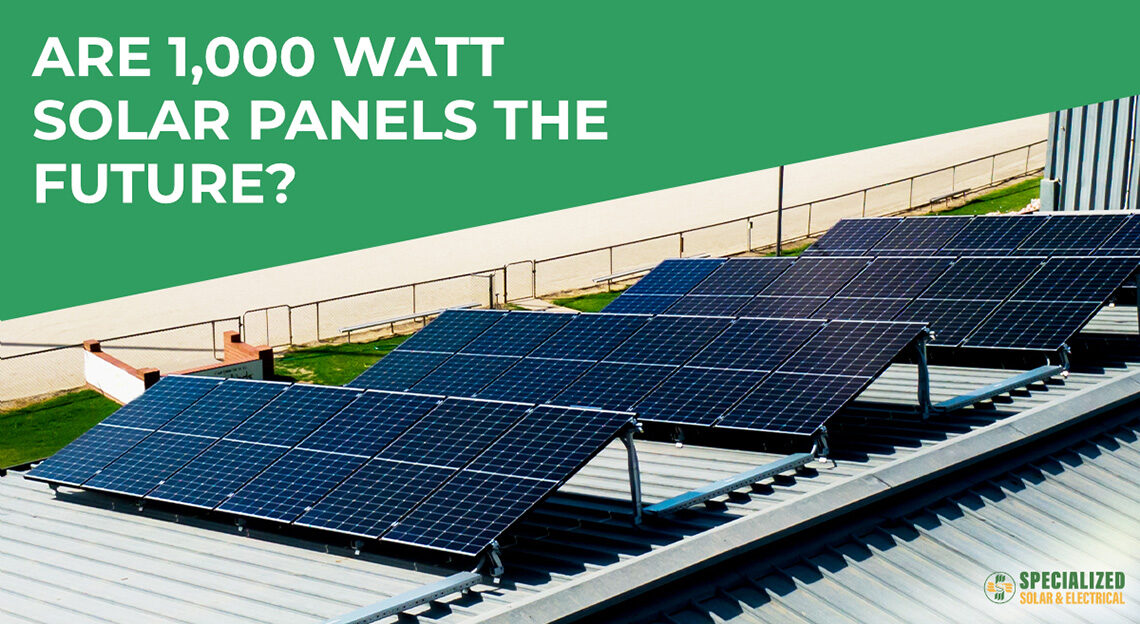 The improvement in solar panel technology continues in leaps and bounds. Every year, solar panels are becoming more powerful, with a higher wattage per panel.

Today, it’s common to find the best solar panels with a nameplate rating of 390-450 watts.

The question is: Could solar panels ever get to 1000 watts per panel – i.e. 1kW per panel? And, even if a 1000-watt panel was possible, would it be affordable?

The upshot is that not only are solar panels becoming more powerful, but they are also getting cheaper. Back in 2010, solar panel prices were over US$2 per watt. They dropped to just over US$0.20 per watt in 2019. Today, the price per watt for solar panels has increased to around US$.30 per watt due to supply chain issues in China and rising shipping costs caused by the Covid pandemic.

Despite this recent price hike, the downward trajectory in solar panel prices over the last 11 years is staggering. It’s one of the main reasons for the global expansion of solar – and why here in Australia, 3 million homes now have rooftop solar!

What is the world’s most powerful solar panel?

Not only is Jumbo powerful, but it’s also one of the biggest solar panels in the world. Measuring 2.220 metres high by 1.757 metres wide, it is more than double the size of the typical solar panel you could get installed on your home.

World’s most powerful solar panel is more than twice as big:

A big reason for the massive size of the Jumbo 800-watt solar panel is that it uses larger-size solar cell wafers.

What are solar cell wafers?

Why would JA Solar make such a big wafer for its solar cells?

The answer is simple, to decrease manufacturing costs and improve efficiencies in the production process.

All this is good news for solar panel technology, but how could you fit these Jumbo panels on your home?

The answer is not very easily – unless you live in a mega mansion!

These super powerful panels are being developed for mega-scale solar farms and other utility-scale solar projects.

Take for example the hypothetical situation that you’re in charge of building a 2 mega-watt solar farm. You could select 390-watt solar panels, but you’d need over 5,000 of them. Whereas, if you chose 800-watt panels, you’d only need 2,000. That’s going to mean a massive saving in installation costs. It’s a bit of a no-brainer, assuming of course that the 800-watt panels come at the right price.

With the world’s nations picking up the pace in large-scale renewables in response to the climate challenge, solar technology is getting super-charged by investment from governments and the private sector. Radical improvements in solar panel power output – like the Jumbo 800-watt – will have a trickle-down effect. The tech innovations that go into these amazing new solar panels will start to become available in mainstream panels for our homes and businesses.

Whilst the 1000-watt solar panel for your home isn’t a realistic proposition for 2022, chances are it will be available at some point in the future.

To meet this challenge, the solar industry will need to make super powerful panels at a size that fits on residential rooftops – and at a price that’s affordable. Whilst manufacturing efficiencies are part of the solution, so too is panel efficiency (i.e. the rate at which the sunlight that hits the panel is converted to usable electricity).

Solar panel efficiency where Aussie start-up SunDrive is focussing its efforts. Just this month SunDrive announced that it has beaten the world record for commercial solar cell efficiency and plans to move into production of solar panels for the residential market in 2022.

Making the most of limited roof space on residential roofs is the stated reason why SunDrive is targeting the residential sector first.

Solar panel technology is moving forward at an amazing rate. Who knows the exact date you’ll be able to get a 1000-watt panel on your roof? But the odds are excellent that this will happen at some point in the not-too-distant future!