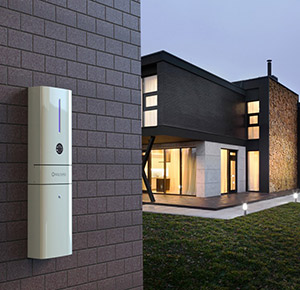 Become less reliant on power from the grid with a Soltaro All-in-One Battery Storage System. Store unused power from your solar panels and use it – when you need it – at night or if there’s a power outage.

Launched in 2016, Soltaro is an Aussie-owned, Aussie designed battery storage system that’s taking the global battery storage market by storm. With over 10 megawatt hours of batteries installed, the Soltaro is proving hugely popular in the UK, Europe and Asia as well as Australia.
Built-in reliability

There are lots of reasons for Soltaro’s success. For one, it uses one of the safest, most reliable battery chemistries available – Lithium Iron Phosphate.

Another reason is that it’s an all-in-one unit with the Inverter, Battery, Charger & Battery Management System all in the same box. One unit from one manufacturer. This means there’s just one phone number to call in case something goes wrong. If it does, there’s an Aussie-based tech support person ready to sort things out, delivering top-notch service as part of the Soltaro 10-year product warranty.

The Soltaro will work with an existing solar panel system as a retrofit solution – or it can be used as a complete All-In-One solution for a home going solar for the first time. With the Soltaro you can start small if you like, with 4.5kWh of battery storage, and add to it as your needs change.

The Soltaro delivers a better payback than many other batteries because it can charge and discharge power twice within 24 hours.
For example, if your battery hasn’t been fully charged by your solar power system during the daytime, it can automatically top up with grid power on an off-peak rate (assuming you are on a peak/off-peak tariff). You could then use your stored battery power during peak times (such as during the evenings) rather than drawing from the grid when it is most expensive.
Given that the Soltaro can repeat this charge-discharge cycle twice in a 24 hour period, the net benefit to you is twice the savings compared to other batteries that only work half as hard.

Soltaro puts you in control of your power usage. From the app, you choose which appliances use power from the battery first. You can also switch on appliances remotely so they draw power from your solar power system, or from your battery, when you’re not home. That’s pretty handy if you want to return to a cool house on a 40 degree day!

We know from experience that the last thing people want it a battery that’s noisy. Once again, the Soltaro fits the bill. No matter whether you get a 4.5kWh battery, or one that’s two or three times bigger, you’ll hardly be able to hear it due to its noise emission rating of less than 25 decibels. That’s a big reason why so many homes in the UK and Europe have a Soltaro All-in-One System installed inside their home, even in the living room!

Ticks all the boxes

Quite simply, the Soltaro ticks all the boxes: