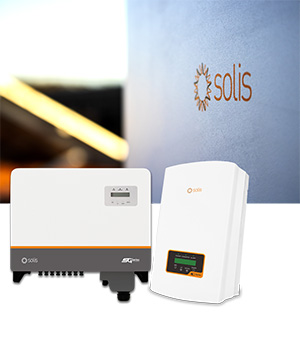 Solis is an award-winning brand of inverters designed and made in China by Ginlong Technologies, one of the world’s largest solar inverter manufacturers.

Established in 2005, Ginlong is a multi-billion dollar company with offices in over 20 countries. It is publicly listed and ranks as one of the top three inverter manufacturers in China.

The company invests heavily in R&D to ensure that their inverters are highly efficient, technically advanced and robust.

Ginlong Technologies manufactures the Solis inverters in its own purpose-built manufacturing facility in order to maintain complete control over product quality. Solis inverters have been awarded the title of ‘Top Inverter Brand’ by the photovoltaic authority research organization ‘EuPD’ for four consecutive years -2016, 2017, 2018, 2019. They have been used in high profile installations around the world including the Shanghai Expo and the Eiffel Tower.

Solis inverters have been available in Australia for over 10 years. They meet all relevant Australian standards – including AS/NZ 4777 – and are listed as Clean Energy Council (CEC) approved inverters (this is required if you want to apply for the Victorian Solar Panels rebate).

One reason for the success of the Solis inverters in Australia is that they are designed to operate effectively in extreme weather conditions. They have a rated operating range of between -25 to 60 degrees Celsius, as well as in-built temperature protection and cooling.

Efficiency rating is a measure of how effective the inverter is at converting power from your solar panels (DC) into power that can be used in the home (AC). Solis states on their website that they test the efficiency of their inverters in typical operating conditions – rather than ‘ideal factory conditions’.

Solis inverters have an efficiency rating of over 97%, making them one of the most efficient inverters on the market.

Solis’s Australian office – based in Cheltenham, Victoria – provides responsive customer support and fast turnaround times. Due to the company’s focus on product quality, Solis inverters have a very low failure rate. However should there be a problem with your inverter you can rest assured that it is backed by a product warranty of 5 years which can be extended to 10 years if you wish.

Solis: Ticks All the Boxes

Solis inverters are a solid choice for anyone looking for a well-priced inverter that is designed to perform efficiently in Australian conditions.

We reckon it ticks all the boxes!