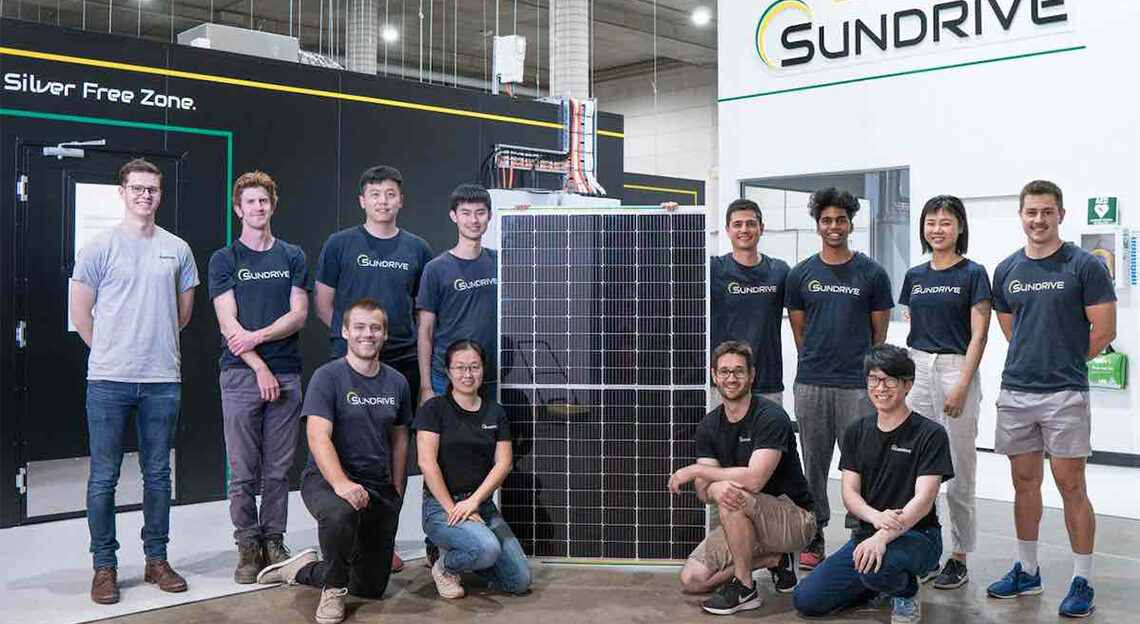 The solar panels installed on your roof may soon be from an Australian start-up solar technology company that’s beating world records for solar cell efficiency.

Sydney-based SunDrive was founded in a garage by two UNSW graduates in 2015 – Vince Allen and David Hu.

Today, SunDrive is backed by billionaire Mike Cannon-Brookes and the Australian Renewable Energy Agency (ARENA) with UNSW alumni Dr Zhengrong Shi Founder of SunTech – one of the world’s biggest solar panel manufacturers – on the board.

Just a week ago, SunDrive announced that it achieved a world record of 25.54 per cent for commercial size solar cell efficiency, apparently beating the world record held by Chinese solar giant Longi. Testing was carried out, SunDrive said, by Germany’s Institute for Solar Energy Research in Hamelin.

Most quality solar panels these days have an efficiency rating of 19 to 21 per cent. Solar panel efficiency measures how much of the sunlight that reaches the panels is converted to usable electricity.

A step-up to 25.54 per cent efficiency is potentially an industry game-changer, particularly if the panels can be produced at a competitive price.

Reducing costs – both in production and installation – is one of the stated aims of SunDrive.

To achieve that goal, SunDrive uses copper in the solar cell design. This is a key point of difference for SunDrive, compared to most other solar panel manufacturing companies.

The standard way of making solar panels is to use silver as one of the key components. Silver is a scarce, precious metal. Global solar panel manufacturing uses 20 per cent of the world’s silver annually and requires vast amounts of energy in the production process.

Copper is 100 times more abundant than silver, requires less energy to process and offers the potential to reduce the cost of solar manufacturing. And with SunDrive’s advanced cell design, the panels have the potential to hit the sweet spot in terms of lower costs, improved quality and performance.

“Over time the technology is expected to become more cost effective than current solar cell technologies and be adopted for large-scale solar,” said ARENA.

SunDrive has stated that they intend to move into full-scale production in 2022 initially targeting the residential solar panels market.

“SunDrive initially aims to use its technology to focus on the rooftop solar sector, where space is at a premium. Higher efficiency cells can produce greater amounts of energy for a given footprint,” said ARENA.

Whilst pioneering solar photovoltaics technology was developed in Australia at the UNSW in the early 2000s, most of the graduates at that time took their expertise abroad where conditions were more favourable.

As a result, Australia lost the opportunity to become a major player in burgeoning global solar PV manufacturing industry.

But now, with the Australian Government’s backing and strong support from the private sector, SunDrive looks well-positioned to become an Australian solar success story.

The timing is good too, as the solar panels market has recently seen price increases of around 20-25 per cent for solar panels coming out of China.

Home-grown high-tech solar panels that tick the boxes in terms of price, efficiency, and performance sound like a winner – no matter which way you look at it.

Good luck SunDrive! We can’t wait to see the first batch of your rooftop panels in our warehouse!